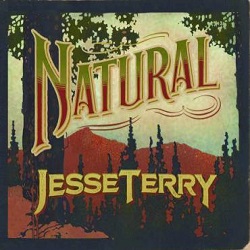 On his fifth album Jesse Terry has moved away from his usual roots-rock arrangements for a stripped down and mostly acoustic take on songs familiar from his previous albums – with a cover thrown in for good measure. An additional twist is that Terry has teamed up with a number of his favourite female singers – amongst them Dar Williams and Kim Richey – to make this also an album of duetting voices, although on a few tracks it’s predominantly Jesse Terry with guest-star backing vocals. The combination naturally has the effect of making ‘Natural’ a very soft and gentle album, the songs becoming more reflective with these arrangements as the lyrics come more directly into focus.

Jesse Terry has a knack for harmonising, ‘Noise’ with Dar Williams is a beautiful example, yearningly rejecting all sounds the world has to offer in favour of just one “I won’t hear the rain start its drumming / the streets could all be flooding / but without your sweet voice / all the world is noise”. ‘Mountain Rose’ brings in Cary Ann Hearst to create a countryfied ballad from a drunken experience and a not so necessarily a bad thing stumbling in sensible adult behaviour. ‘I was an island’ is a confessional of a slowly awakening love with softly breathed supporting vocals from Kim Richey.  The one cover on the album, Jeff Lynne’s ‘Mr. Blue Sky’  changes dramatically in the hands of Terry and Liz Longley.  The mood of this well known high-gloss pop song is made wistful, the gleeful bombast reduced to a few bars of distorted booming drums – it’s more obviously remade and remodelled by being already more generally familiar.

With several of these songs having only appeared, in a different form, last year ‘Natural’ does have a slight feel of sitting somewhere between an album of demos that might under other circumstances have been released as a “bonus disc” and a fun stop-gap project with artists that Jesse Terry just felt like singing with. There’s nothing really wrong with that but ‘Mr. Blue Sky’ shows an alternative for what the album could have been – re-imagined songs recorded with favourite female singers, and that might have been more effective.

Jesse Terry recruits favourite vocalists to re-imagine his back catalogue. Pretty – but not earth shaking