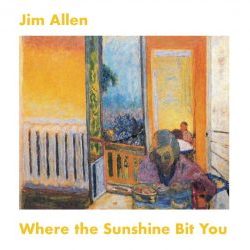 ‘Where the Sunshine Bit You’ is the first solo album from Jim Allen in many years and it finds him in a good-natured mood. A respected songwriter on the New York scene, Allen says that he’s: “not trying to be the next big anything.” However, after years pursuing band projects, Allen has plenty left to say on his own. Recorded live, the record has an authentic feel and there’s a joy in the composition and performance of this set of varied songs.

The opening track, ‘All the Way Down the Line’, has a driving rhythm and could be a release from his classic, rocking country band, The Ramblin’ Kind. The song is very busy lyrically, releasing a steady stream of ideas, images and clever phrasing. Allen has a poet’s knack for finding smart rhymes and alliterating words and phrases that help to create a strong beat. His voice is deep and characterful, almost spoken at times, and full of life’s experiences, “Let the midnight mist come and custom fit you / Let the moonlight soothe where the sunshine bit you,” suggesting there’s plenty of dark to go with the light. He slows down for the second track, ‘The Day After Tomorrow,’ on which he delivers a higher-pitched, but no-less characterful, vocal.

The melodic finger-picking of ‘Wedding of the Dead’ and pleasing vocal are at odds with the amusingly gloomy lyrics, “Here comes the groom all dressed in doom / He’s got a bloodstain on his tie.” These are commonly used devices throughout as Allen plays joyfully with language and humour with unexpected word choices (‘…phylacteries…’; ‘…boutonniere…’; ‘…insouciance…’) sitting comfortably alongside more colloquial, amusing phrases, such as, “This hole has got a boat in it…” and “Here’s a firm, fast foot in your ass / God knows that’s the seat of the soul.” That he pulls it off demonstrates Allen’s talent as a wordsmith as well as a songwriter although the songs can become a little obscure at times.

Allen’s deep voice is at its best on the slower tracks, including the gentle ‘Going Under’ and ‘Nightingale,’  the latter having a hushed beauty as the echoing vocal rises and falls with the guitar melody. His singing style varies, at different times bringing to mind the likes of Leonard Cohen, Greg Brown and Merle Haggard. The more upbeat songs provide an effective change in pace, and probably play well live, but are slightly less engaging for the listener and don’t have quite as strong an identity. One of the album’s best features is the quality of the backing vocals and harmonising, particularly on ‘Going Under’ and ‘What I Deserve.’ The voices play together naturally, creating a richer, warmer sound. The supporting musicians, including Joanna Sternberg on the upright bass and Matt Applebaum, who also plays with Allen in The Ramblin’ Kind, perform well, adding depth.

All in all, there’s much to enjoy on this classic country affair. While it doesn’t break down boundaries or introduce, “…the next big anything,” in Allen’s own words, he has crafted a set of intelligent, pleasing songs that showcase his distinctive vocals.

An enjoyable combination of playful lyrics and characterful vocals