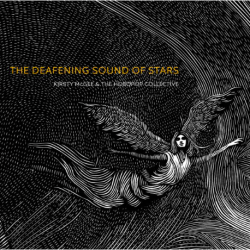 Over a decade since her initial founding of the band, Kirsty McGee is back with her Hobopop Collective, a band that she describes as ‘an ever-changing bunch of leftfield misfits’. Their sound is wide-ranging and clearly wrought from years of touring and collaborating. McGee’s website describes the sound as sitting in a nameless space, somewhere between Jazz, Folk, Gospel, and Americana, and this sums it up perfectly.

‘The Deafening Sound of Stars‘ spans all of the above genres and more – the first few tracks are slow, easy, jazzy numbers which put you in mind of a sleazy New Orleans bar, the trumpets expertly weaving around McGee’s vocal. The jazzy tracks really showcase the breadth of musicianship in the group, and with plenty of wonderful playing across the board, they create a palpable, as-live atmosphere.

This isn’t all that’s on offer, however, and things take a folkier, more stripped back turn later on the record. ‘Copenhagen‘ is a particularly pleasant, dreamy sort of track in this ilk, the standout being ‘Greedy Little Things‘ which is achingly beautiful and lyrically excellent. The penultimate and title track takes a further turn, descending into an almost ambient soundscape for the last minute or so, which is excellent.

The overall impression from the album is one of an artist freely exploring her own creativity and craft, clearly collaborating with others on the same wavelength. The freedom to do this comes in part from McGee’s loyal fans, this album being funded partly from Kickstarter backers. The crowdfunding phenomenon itself is a discussion to save for another time, but in this case there seem to have been clear and obvious benefits. The genre spanning work of The Hobopop Collective is unorthodox and strange and wonderful – and as a result it would be a hard-sell for record execs. However, this is the kind of band that builds up a ravenously loyal live following, and thanks to crowdfunding is able to use this backing to help them continue making records without any creative restriction. Everyone’s a winner!

This is a creatively honest record from a seasoned band very much doing their thing. There’s hazy jazz, poppy folk, mournful and beautiful songwriting. As a whole, it might not be for everyone, but nearly everyone will find something they like.

A genre-defying trip from sleazy lows to celestial highs