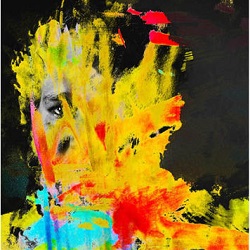 Michael Nau had already been pretty busy over the years with his bands Page France and Cotton Jones, but having released a solo debut, Mowing, last year – which had been the result of working into shape a series of demos that had been knocking around for some time – he made the decision to not hang around on producing the follow up. Some Twist doesn’t feel hurried though, more it has a classic singer-songwriter feel particularly on a couple of reverb heavy tracks which bring the much missed Harry Nilsson to mind: although Michael Nau doesn’t have the same vocal range he does catch the same handling of a lyrical turn of phrase. Wonder, for example, has the same wistful yearning that you can find on The Moonbeam Song: “there’s no-one anywhere waiting for me / I do not have a job to do / I’ll spend the whole daylight recording / Or I could wonder about you”.  I Root adds a light soul feel to the same seventies mix, with more wonderful echoing on the vocals.

Not that Some Twist is a Nilsson tribute – Good Thing is a dramatic piano led song which will appeal to fans of Sturgill Simpson and there’s also a bit of John Grant-esque electronic noodling elsewhere, emerging as a slightly harder edged soulful groove on Scumways, where to a finger snapping beat Michael Nau hands out advice to the down and out – whether literal or in love – “you better move on past / you’d better move on soon / you’d better move on fast / better be gone soon” because “somebody just might / know what you’re thinking / it’s easy to do / know who you are / ‘cos everybody is just like you”. It’s a solid groove. It’s true that some of the tracks do have a slightly underdeveloped feel to them, the minute and a half that makes up the instrumental Twelve has a moody jazzy feel but never really gets anywhere, but as a whole Some Twist is a solid effort lifted by a few more polished pieces.