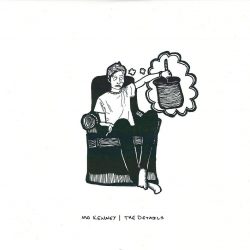 “The Details” is the fascinating third album from multi award winning Canadian singer-songwriter Mo Kenney. Kenney was discovered by noted Canadian rocker, Joel Plaskett, while she was still at school and released her debut eponymous album in 2012. While that album was still groaning under the weight of awards and award nominations she put out her second album, 2014’s “In My Dreams”, which also attracted awards nominations by the bucket load, including a Nova Scotia Music Award Winner for Recording of the Year. At a tender age it’s fair to say that Mo Kenney is already a well-established name in her native Canada, even if she’s yet to make a major impact wider afield.

What makes this album so fascinating is the shift to a more rock oriented sound. Kenney’s earlier albums are much more acoustically based and she has been known for her fingerpicking style. “The Details” is more of a rock album, almost grunge sounding in some places. The young folkie has been pushed aside by a rocker with attitude – and it’s a style she delivers with conviction, in the studio at least.

Her song-writing remains much the same – there’s always been that element of shoe gazing angst about her writing and previous albums have put her in the alt folk category. With this new release she presents a far more aggressive persona and it’s very much in keeping with the songs on this album. This album is all about her own journey through the booze fuelled, near breakdown following a failed relationship.

If You’re Not Dead looks set to be the first release from the album and it’s a strong indicator of Mo Kenney’s new direction. If your previous experience of her music takes in old tracks like Sucker and/or I Faked It then the music on this track is certainly going to make you sit up and take notice – all jangly, slightly scuzzy guitar and angular drumming that tells you, in no uncertain terms, that Mo Kenney is not an acoustic alt folky anymore.

The album kicks off with wry break-up song Cat’s Not a Cake – “we have a cat/ cat is our kid/ when we break up/ we’ll have to split him in half”. It’s a short, acoustic ditty that lulls you into a false sense of security, because the next track, On the Roof, is an urgent, rocking track, full of stops and starts that reminded this reviewer of Blondie in their early days. In fact much of the album has the feeling of something that wouldn’t have been out of place in the post punk power-pop era. The title track, Details clocks in at a brisk 29 seconds and the album boasts a number of short tracks that are little more than punctuation marks but the disc feels well thought out and assembled. The more you listen to the album the more you come to realise that this isn’t so much a departure from Kenney’s earlier albums as a logical progression in the way she approaches her music. It’s an album that wrong foots you at every turn and is all the better for it. This is the sound of a young artist hitting her stride and “The Details” will, undoubtedly, attract more award nominations but it should also be the album that brings her to the attention of a much wider audience.

An impressive 3rd album from a Canadian artist not afraid to push the boundaries.