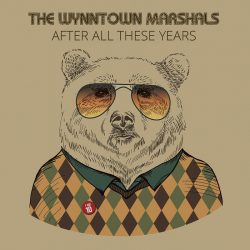 After almost ten years since their formation and three full length albums as well as countless EP’s into their career, The Wynntown Marshals have decided to stop and celebrate their output in the form of half-retrospective, half-greatest hits ‘After All These Years’ whilst treating us to two new tracks and a re-recorded version of an older track with the groups most current line-up.

The group kick off the compilation with a number of high energy tracks, Low Country Comedown from 2013’s ‘The Long Haul’ and Red Clay Hill from their 2015 release ‘The End of The Golden Age’ are both brilliant introductions to the band for new listeners and a good way to remind fans what makes them so special – brilliant vocal harmonies, simple yet imagery evoking lyrics from vocalist Keith Benzie and some brilliant musicianship on offer from the steady backbeat to the complementing electric guitar twang heard throughout, each member adds something to make the songs their own without overcrowding things which is a pattern that emerges throughout the entirety of ‘After All These Years’. The first of the new tracks on offer is Your Time and fits seamlessly into the first part of the record maintaining the flow and introducing the organ skills of Ritchie Noble to bring an extra dimension to their already established sound.

From here on the album continues in the same vein with upbeat, power-pop songs from their impressive catalogue until we reach the second of the new tracks, Odessa, which is an absolute blinder of a song. The song starts with an acoustic guitar and simple vocal and then the band slowly come in; beginning with the organ then an obscenely well placed electric guitar lick, the track is a masterclass in how to write a ballad. This followed by the historically accurate 11:15 about legendary floods and storms ravaging Scotland back in the 1800’s is where the collection really hits its peak and serves to demonstrate how diverse the group can be both in terms of lyrical content and stylistically.

Towards the end of the disc, the re-recorded Different Drug breathes new life into one of the groups older songs (the originally was on their first EP back in 2008) and production aside, although not too different from the original, in close comparison, there is a stronger sense of purpose and confidence in the new version that hints at a band that has not only grown more comfortable with their sound as their career has moved on but also, a sense of comfort with their current line-up and the way they gel. Alongside the other two newly recorded tracks, if this is any indication of what is to come from their future releases, then the only way is up for the group.

‘After All These Years’ is an essential collection for both old fans needing something to tide them over until their next release and new fans looking to explore some of the band’s definitive work and overall, shows why the Scottish group are worthy of their unofficial title of ‘Europe’s Best Americana Band’.