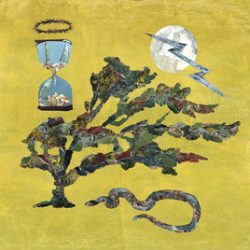 These three EP’s are the first three instalments of a planned quartet of releases, and there’s nothing startlingly different about each record. They are all super competent Americana, aiming foursquare for the middle ground, populated by the likes of later period Avett Brothers, five tracks each, short and sweet punches, drawing no blood but spraying sugary harmonies with each jab landing.

“I” announces them as a supremely easy band to listen to, the sweet rush of Alright By Me enough to prick the ears of any Americana listener, enough harmony, enough melody, enough cliché and enough personality to announce themselves as a band worth a listen. In The Morning does nothing to disavow this thought, straying into Bluegrass territory, the playing nimble but not technique for the sake of technique. Always Enough changes pace a little with the mandolin playing a leading role and the harmonies a little more downbeat. America as its title might suggest moves into broader territory, away from the personal and towards the political (definite small p) but more a celebration of values than a critique of the system.

“II” starts in much the same way as “I” with bright chords and the mix of country rock with hints of Bluegrass, but this time they sing about being in a band on tour. LA County Line again doesn’t stray too far from the template, and as usual there’s a lot to like and little to object to. It isn’t music that will challenge you, it’s the kind of music that will reinforce your liking of this type of music, the pleasures easily derived. Rumbling And Tumbling gives up its pleasures as easily as the Jayhawks – on display, it doesn’t need to be found. Santa Fe continues this, albeit at a gentler pace with the mandolin and organ providing the support structure. New Orleans closes this EP and proves to be their strongest song yet, adding in layers of complexity, an eye for detail and still at first listen everything is affable.

“III” doesn’t change a winning formula. Peace of Mind is less straightforward, a bit denser with more elements swirling around without overwhelming the simple pleasures of the melody and harmony. Hurricane Girl redresses this balance, the banjo and the vocals front and centre, the rhythm section following dutifully like a good hunting dog. They don’t do brevity, the songs average around four minutes; they’re happy to let them breathe, and mostly they never drag. The slow-burning NY Or Memphis brings to mind the Pernice Brothers’ early records.

It’s hard to argue with music like this. It is without artifice. Divided has nothing hidden, this open honesty is part of the charm, that mixed with superb musicianship makes the whole experience a pleasure from start to finish. Roll on “IV”.