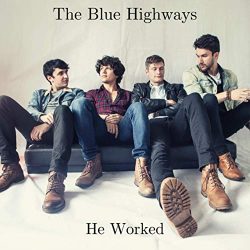 Brothers in bands huh? Often fraught, sometimes fragile and rarely friendly. It can end badly but there is also the potential for genuine magic, which can seem harder for sibling-free groups to reach. The Blue Highways have three of them: Lurys in the name of Callum (Vocals & rhythm guitar), Theo (drums) and Jack (lead guitar). It’s not possible to vouch for their relationship or how it will develop in the band but, together with bassist Pete Dixon, they are currently looking set for a measure of success with the release of their rootsy yet soulful debut EP.

The brother thing does inform their sound, not least through some finely tuned harmonies layered over the four tracks here but it is songwriter Callum who is the band’s driving force.

He may describe his songs as “narrative” but they do not tell what we would recognise as stories; there is no dynamic development in their accounts, no real movement or time line. Rather they are like still snapshots of the intricacies and mundanities of people’s everyday lives. Snapshots that are neither sepia tinted nor arty black and white, but like yellowing and slightly over-exposed 1970’s Polaroids. Their lack of artifice is refreshing, shunning the dramatic in favour of an almost ‘Raymond Calver like’ ordinariness as a way of delivering keen atmospheres and hidden depth.

Lury deals with his songs in a thoughtful way, not always spelling out the detail and allowing the listener to find their own locations and insights within. Whether it be enigmatic love songs that question the very concept (‘Matter of Love’), philosophical treatise on the nature of lies and lying (‘Blood off the Tracks’) or laments for opportunities passed (‘He Worked’), the different possible interpretations of these songs shows the subtlety and depth of the lyrical treatments offered.

He seems less interested in a showy display of intellect than in shifting the angle from which we view the lives of his protagonists. So at first the elusive stillness of his stories appears to be at odds with the foursquare musical arrangements. The energy of the exuberant, rousing and, at times, almost sentimental music sounds as though it would be more at home soundtracking a ‘big night out’ movie than the intimate portraits on view here. However, after a couple of listens the stories begin to crystallise and their impact is enhanced by the work the listener has had to put in to engage with them.

The musical settings presented here are mostly powerful and dynamic with a fierce drive pumped by a soulful heart that recalls the late 70s Jersey shore sound of Southside Johnny, Little Steven and (stretching the geography) Mink Deville. The affinity with 1970’s New Jersey is especially evident with the blazing horns that lead off the EP on ‘He Worked’ and present as clear a musical manifesto as one could wish to hear.

Throughout the record they continue to conjure the tight muscular attack of the Jersey bands leavened by a welcome sense of swing. Giving a dynamic that propels the songs, powered by a vigorous rhythm section, tight vocal harmonies and splashes of added colour to perfectly serve their requirements. Witness the Mclagen sounding barrelhouse piano on ‘Blood off your Hands’, the extra harmonies of fourth Lury brother Ewan on ‘Matter of Love’ (a dead-ringer Beat Farmers outtake) or the keening pedal steel on ‘Have you Seen my Baby?’. This last is the final song and the summation of the EPs musical trajectory from BIG arrangements to more intimate, almost pure country stylings.

This parting shot is evidence of the band being able to colour their snapshots using a broader musical palette and perhaps points the way to future opportunities for The Blue Highways to expand their melodic and rhythmic horizons. In particular, the possibilities offered by their three (and four) part family harmonies could really be explored further, starting by retrieving them from the back of the mix and really letting them communicate.

This aside, the EP ought to be considered as good as any UK debut of its ilk since perhaps the first Grand Drive record. With their regular gigging and numerous high profile support slots it could give them a real chance at a wider audience and an actual career making music – assuming the brother thing holds out of course.

Band of brothers' (+1) assured debut from the 'Southside'