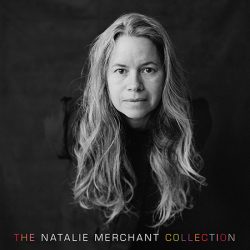 Nonesuch Records have announced the release of “The Natalie Merchant Collection” which will be a deluxe ten-CD box set compiled by Merchant herself and released on June 23rd. The discs include all eight of her solo studio albums from the past three decades, a new studio set featuring four new songs and six reinterpreted selections from her catalog called “Butterfly” and a final disc featuring a collection of fifteen rare and previously unreleased tracks recorded between 1998 and 2017, including home studio demos, album outtakes, live tracks, and collaborations with artists like Billy Bragg, David Byrne, The Chieftains, Cowboy Junkies, and Amy Helm.

The package includes a 100-page lyric book and pictorial history of the singer-songwriter’s solo career. Pre-orders are available now in the Nonesuch Store with an instant download of the new recording of “Frozen Charlotte” from the Butterfly disc (which you can also hear below) as well as an exclusive, limited-edition print autographed by Merchant.

To coincide with the release of the box set, Merchant will tour the US this summer with Natalie Merchant: 3 Decades of Song, performing songs from across her career. A portion of the tour’s proceeds will be donated to the environmental organization Food & Water Watch, which champions healthy food and clean water. No word yet on UK dates but keep an eye out here for any news on them.

DISC 4 – THE HOUSE CARPENTER’S DAUGHTER (2003)
Sally Ann
Which Side Are You On?
Crazy Man Michael
Diver Boy
Weeping Pilgrim
Soldier, Soldier
Bury Me Under the Weeping Willow
House Carpenter
Owensboro
Down On Penny’s Farm
Poor Wayfaring Stranger
DISC 5 – LEAVE YOUR SUPPER (2010)
Nursery Rhyme of Innocence and Experience
Equestrienne
Calico Pie
Bleezer’s Ice-Cream
It Makes a Change
The King of China’s Daughter
The Dancing Bear
The Man in the Wilderness
maggie and milly and molly and may
If No One Ever Marries Me
The Sleepy Giant
The Peppery Man
The Blind Men and the Elephant

DISC 6 – LEAVE YOUR SLEEP (2010)
Adventures of Isabel
The Walloping Window Blind
Topsyturvey-World
The Janitor’s Boy
Griselda
The Land of Nod
Vain & Careless
Crying, My Little One
Sweet & a Lullaby
I Saw a Ship A-Sailing
Autumn Lullaby
Spring and Fall: to a young child
Indian Names

DISC 10 – RARITIES (1998–2017)
The Village Green Preservation Society
Too Long at the Fair
Order 1081 (with David Byrne & Fatboy Slim)
To Love Is to Bury (with Cowboy Junkies)
Saint Judas
Birds & Ships (with Billy Bragg)
The Lowlands of Holland (with The Chieftains)
Sonnet 73
Learning the Game
My Little Sweet Baby
Political Science
Build a Levee
Sit Down, Sister
The Gulf of Araby
Portofino