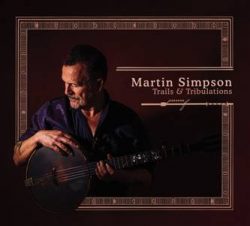 Guitarist, singer and songwriter Martin Simpson has announced the release of his 20th solo album in 40 years ‘Trails & Tribulations’ which is out on September 1st 2017 via Topic Records. The new studio album, his first new solo work since 2013’s ‘Vagrant Stanzas’, will be available in standard and deluxe CD, digital download and standard vinyl (the latter through Vinyl 180). It’s described as “a collection of songs about nature, about travels and about real life stories. There are traditional songs, poems and contemporary songs by great writers, and songs that I had to write because nobody else knew what I wanted to say. I travel, I learn songs, I write and try to get better at the skills required for me to do my job. I look at the world as I pass by, on the road, out of the train window, or as I stop and pay close attention to the square foot under my nose. There is so much to see and to hear and to inspire and to try and understand.  I had a huge amount of fun playing and recording these songs, using different instruments, different noises, old friends and new ones, all of whom brought so much to the mix.”

Simpson will tour extensively this year, including a headline set at Cambridge Folk Festival in the summer and London’s Kings Place in autumn, following the release of ‘Trails & Tribulations’. Full tour details at his website here.  Tracklisting below, plus a clip of him playing “Springwatch” (the BBC show!) 4 years ago.