Because Music have announced the release of ‘Stay Around’, the first posthumous album by beloved songwriter, guitarist, and singer JJ Cale, on 26th April in the UK. ‘Stay Around’ has been compiled by those closest to Cale, his widow and musician Christine Lakeland Cale and friend and longtime manager, Mike Kappus. You can watch the video below of the album’s debut single, ‘Chasing You’, featuring footage of Cale touring (which he seldom did) and performing across the U.S.

All tracks on ‘Stay Around’ are previously unreleased, a fact that’s not unusual considering Cale’s modus operandi: often Cale would reserve outtakes from one album for later release on another. Mike Kappus, who managed Cale for 30 years and has worked with his estate since his passing, explains, “‘Roll On,’ the title track of Cale’s last studio album, was 34 years old. He would burn me CDs of demos, and one time I said, ‘You’ve got two good albums on here.’ Some of the tracks had detailed information, some of them had nothing. Some songs might be a full band of his buddies, others were him playing everything. These were songs he really did intend to do something with because they were carried to his typical level of production for release.” 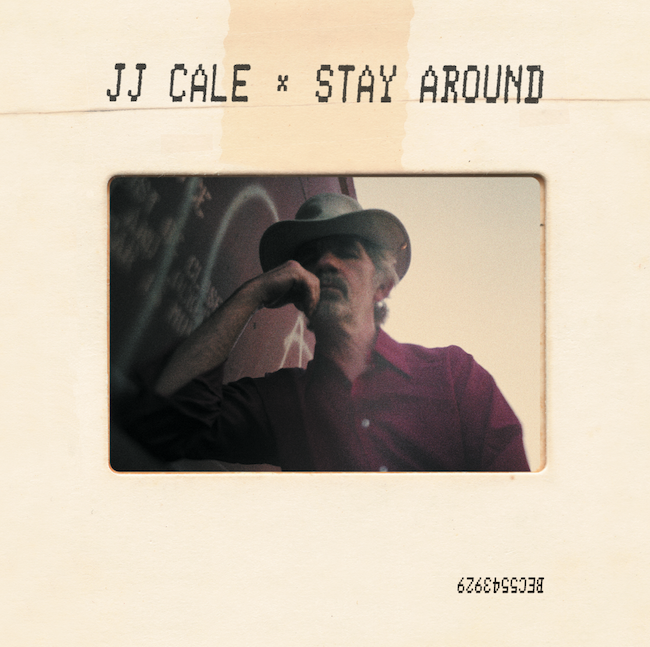 On ‘Stay Around’, the only song not written by JJ Cale is Christine Lakeland Cale’s ‘My Baby Blues,’ the first song she and JJ cut as a four-piece combo in Bradley’s Barn studio in 1977, the year they met. Not only his widow but a member of his band for many years, she expresses that the song “brings everything full-circle” for her. In compiling the new album, Christine Lakeland Cale pored over songs, both studio and home recordings that the public had never heard. She adds, “I wanted to find stuff that was completely unheard to max-out the ‘Cale factor’… as much that came from John’s ears and fingers and his choices as I could, so I stuck to John’s mixes…You can make things so sterile that you take the human feel out. But John left a lot of that human feel in. He left so much room for interpretation.”

Cale himself said, “I like a funkier sound. I really admire the people who get really good sound. That takes expensive studios, expensive musicians. I delved into that a couple of times, but it’s more fun when I create something to do it myself; it always has a unique sound. If I start doing it standard-wise, it becomes more polished and it doesn’t sound quite as unique; it sounds like everybody else.”