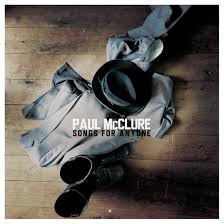 So it’s roundly acknowledged that McClure is one of the nicest men in music, and my experience is that’s difficult to disagree with, the Rutland Troubadour returns here an album of exceptional quality, which is nice. McClure is a terrific Ray Davies style songwriter, I love the female vocals that are all over the album as well, and the Eagles feel, a bit of a lazy analogy but it is so true, it is that West Coast, Laurel Cannon feel, sun drenched road music.  ‘Unremarkable Me’ couldn’t be further from the truth, wonderfully structured as a record, the kitchen sink nature of the themes in his songs and deftly record mean this should be pn many a listeners best of 2016 list.

If you want lovers’ tales, good times spent with friends songs, McClure has it – a really positive feeling record, and it induces that in the listener.  It uplifts, he just makes you feel better, and he’s embraced that Bobby Gillespie mantra of “Give out but don’t give up”.  There are some striking similarities to Gillespie elsewhere on the record too, that period of Primal Scream where they jangled indie-pop style.

It is nice to hear the harmonica used on a record properly, not to fill space or worse to cover inadequate guitar playing, and being of one of the UK’s coolest labels Clubhouse suits McClure, cool is the watch word for everything here.  Plus as a fan of male millinery he has a great song on why we favour a stingy brim pork pie – although it’s not one to play your kids.

An album that has plenty of contrast, light and shade, and even the title tracks similarity to Pink Floyd can’t put me off; it’s a marvellous skip through the mind and the mind-set of the modern songwriter.  As the man says “drop the needle and we’ll be gone”………….

Songs about doing a “big shop”

A tribute that keeps the songs respectfully close to their original versions, but the added twist of Earle’s rambling outlaw country keeps things fresh. Steve Earle is all about paying tribute to his heroes. In […]

Jess Jocoy “Let There be No Despair”

A curiously uneven album from Lee Rogers Lee Rogers released his full-length first album in 2006 so it’s taken over sixteen years to release his second ‘Gameblood’  which is quite a wait for his fans.  […]

Interview: Cristina Vane on fuelling her brand of country blues with ’90s indie

Interview: Yonder Mountain String Band’s Adam Aijala on getting outside

Something for the weekend: Angel Olsen “Big Time”

That’s it for us this week dear reader, a sad week for us here as we said our goodbyes to AUK writer Gordon Sharpe whose final piece we published today posthumously – when I look […]

Books Editor, Rick Bayles, writes – When Gordon submitted this latest article for his ‘Paperback Riders’ series neither of us knew it would, sadly, be his last. It has been a genuine pleasure to work […]

A tribute that keeps the songs respectfully close to their original versions, but the added twist of Earle’s rambling outlaw country keeps things fresh. Steve Earle is all about paying tribute to his heroes. In […]

Here on ‘Classic Clips’ we try to bring you the best and the most interesting clips from out there in videoworld. This week we bring you a rather unlikely trio of performers doing their thing […]

Jess Jocoy “Let There be No Despair”