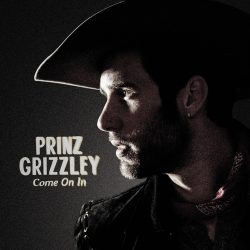 Prinz Grizzley is Chris Comper, an Austrian with his heart in American music. His rural upbringing helped developed a love and passion for the way of life and the music that this landscape inspires. With an eye across the pond Comper, even when dabbling in indie rock/pop, remained inspired by folk, blues and country. Come on In is the first product of that long-standing influence and sits firmly in the country camp. Comper has written all these songs and, with the thread of Aaron Goldstein’s pedal steel running throughout, it is actually hard to believe that they originate from Austria rather than Nashville. In fact, the majority of the songs are better than much of what currently originates from that mainstream conveyor belt of mediocrity; as if Comper has taken the best of it and used his European filter to deliver a product upgrade.

If this, on first play, can be neatly labelled as unashamedly country, there are songs on here that stray away from that lazy stereotyping and deliver some album highpoints. Walls is a passionate and affecting anthem for those living out the end of their days, institutionalised – ‘locked in this room feels like prison to me……….it ain’t walls that lock me in, it is the people who see no meaning in an old man’s tears.’ Fiery Eyes is delightfully brought to life by the horns of Johannes Bar, delivering an uplifting chorus and hook.

The closing track Tell Me Why is a familiar tale of love lost delivered with minimal acoustic accompaniment and the lovely cello of Isabella Fink. It is on quieter tracks such as this that Comper, aka Grizzley, delivers vocals that allow his intelligently written lyrics to be appreciated in a way that is not always the case elsewhere on the album. Whether that is due to Comper’s vocal range or the production on certain tracks it is difficult to tell but regrettably they do detract from what otherwise is a very good album of self-penned songs.