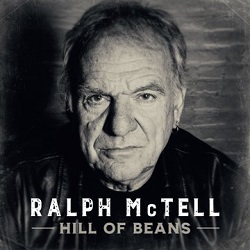 Ralph McTell has notched up more than 50 years as a recording artist, and in that time has released over 50 albums with ‘Hill of Beans‘ being the latest. It’s his first solo studio album since 2010’s ‘Somewhere down the Road‘ although McTell hasn’t been unproductive in the last nine years with a slew of live recordings, guitar “noodlings” recordings and a brace of albums recorded with Wizz Jones – the appropriately entitled ‘About Time’ and ‘About Time Too’. ‘Hill of Beans‘ fits in as very much a continuation of the kind of music that featured on ‘Somewhere down the Road‘ – stories and remembrances both historical and personal and often both at the same time mixed in with carefully observed cinematic scenes such as ‘Gammel Dansk‘.

Which means that ‘Hill of Beans’ is an album that shows off the many sides of Ralph McTell. There’s a comic tale of possible infidelity on ‘Close Shave‘ which is mostly a vehicle for McTell’s finger-picked blues in the style of the great pre-war American Blues players. ‘Oxbow Lakes‘ mixes that blues up with a very English folk sensibility which offers up regrets for striding ahead on a direct route without thinking too much of those who got left behind, cast off like the meanders of a river.

And then there’s a song like ‘Shed Song‘ which is a very particular remembrance of McTell’s grandfather and a shed which became “a church of masculinity“. It’s an orchestrated folk song harking back to a style that cropped up on McTell’s very earliest albums – doubtless due to the hand of Tony Visconti as producer on the album who, back then, worked on similar song arrangements. It adds a certain “retro” feel” to parts of the album, but whichever style a song is framed in they are all true to Ralph McTell’s songbook. Perhaps the nearest to a stylistic innovation is on the piano and gospel choir ‘Sometimes I wish I could pray‘, which honestly attests to McTell’s atheism and how, just sometimes, it would be nice to have an external force for “comfort when you’re tired and scared and have problems that seem without end“.

The album closer ‘West 4th Street and Jones‘ is the nearest the album comes to meeting the expectations of someone whose knowledge of McTell extends no further than the ubiquitous ‘Streets of London‘. Here’s the acoustic troubadour, blowing on his harp and singing of…Dylan and the world of 1963 – the death of Kennedy, an unanticipated break-up with a girlfriend in Soho and the cover of ‘The Freewheelin’ Bob Dylan‘ offering a perpetual promise for the future. For its simplicity and directness of delivery and lyrical complexity it is without a doubt the finest song on the album. No one who already admires Ralph McTell’s music will be disappointed by ‘Hill of Beans‘ – for the newcomer it’s probably not the best place to cultivate a first acquaintance, but you’ll get here in the end.

Ralph McTell's latest is another demonstration of the richness of his songwriting.