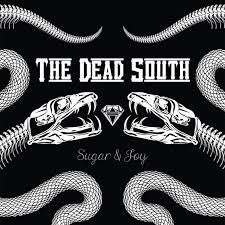 It’s fair to say that The Dead South are making noises with a burgeoning reputation as a kick ass, high-energy bluegrass band. The Canadian four-piece can’t help but enhance that reputation with the release of their new album ‘Sugar & Joy’. Sometimes, when scratching around for the right words with which to articulate the feel of an album, it is in the expressions of others that the perfect descriptor come to mind. The late departed Terry Wogan, admittedly not oft quoted in these parts, had an affectionate term for music like this. This, in Tel’s own words, is “hooligan” music at its finest.

With their traditional arrangement of cello, mandolin, guitar and banjo, and with lead vocals shared though the band, the album demands your attention from the off and never lets up. All the tracks seem to translate a sheer joy of playing, of musicians at the top of their game just having a bloody good time and, for anyone new to their music, it is instantly easy to hear just why they are going down a storm live.

The 47 second opener ‘Act of Approach’ serves as an intro for ‘Diamond Ring’ and this combo sets the bar at a ‘Ben Stokes – summer of 2019’ level and, unlike the England cricket team, suffers no sudden and dramatic dips in form. This is the case even when the pace drops off – best highlighted with the brilliant ‘Black Lung’ with its murky heart set firmly in the grime of the West Virginia coal mines.

This more, pared back approach works again on the epic 6+ minutes of ‘Broken Cowboy’ which is the closest thing to a traditional country track to be found here. If it sounds very different to much of what else is on the album then it somehow doesn’t feel out of place. With its meandering pace, pared back instrumentation and reflective vocals it acts as a mid-album breather if you will, but the imagery it leaves in the mind plays like a wide-screen classic western, and a memorable one at that.

There is a feeling, when first listening to the album, of anticipation, of wondering in what direction these bunch of outrageously talented musicians might head with the next track. The only consistent here is the quality and the sheer infectiousness of the music. High class hooligans indeed.