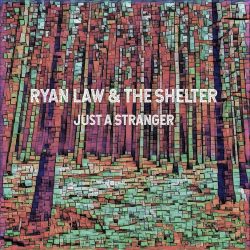 If there is something particularly engaging about AUK and its remit then it is the opportunity to promote new and aspiring artists, who may run the gamut in terms of quality and originality but always impress with their enthusiasm. Ryan Law, guitar, vocals and songwriting and his two colleagues, Eric Smith on guitar and Russell Wedelich on bass, bring that quality to their debut release, ‘Just a Stranger’.

Self-identified influences include REM, (check out, ‘Waste of Time’, though lyrically it’s not one of the stronger tracks on the album)  Whiskeytown and Dawes. Law even seems to have that Stipe-like trill in his voice; nonetheless, the band do have a sound of their own. There is a pop sensibility to their music- which is in no way a criticism – it served REM well enough and it put me in mind of Cheap Trick at times.

The potted history of musical friendship is a tale in itself.  Law is based in Doha, Qatar. Smith is based in Oxford (the English version) and Wedelich is resident in The Bronx, New York.  All three are originally from Texas. Law and Wedelich last played together nearly 20 years ago, while Law and Smith have been formulating songs and ideas for the better part of 10 years.  The trio is augmented by Peter McCullough, keyboards, Jon Graboff, pedal steel and Dominic Geralds on drums.

The album has themes of broken relationships, the current political situation and the trials and tribulations of creativity. The first track, ‘Just a Stranger’, is one of a number that contemplates lost love, ‘Now you’re just a stranger / But you’re the one I want / And it hurts like hell / You started walking backwards / And now you’re outta sight / Are you too far now?’

This is a theme taken up again in, ‘Never Question’, a less personal viewpoint and one that does grate a little in its apparent trade-off between love and the sin of mistreatment, ‘She went down Sunday mealtime / To ID the body on the ground / He mistreated her for some time / But the love was deeper than the sin’.  Which apparently was why she, ‘Never Questioned Why’.  Maybe she might have?

‘I Guess it’s Over’, recounts in a heartfelt admission that, ‘If the opportunity were there / I would let you break my heart again / …… / It’s overwhelming to lose a friend’.  Its always hard to know quite how to respond to someone opening their heart and it’s no easy task for an artist to find something new to say or an original way to say it.  This track feels particularly personal and it does seem that Law has been particularly haunted by his break-up, he really seems to spit out the opening line.

‘Move Along’, offers what has become almost the staple critique of the times – it’s true, ‘We Gotta Make a Change’, though it’s highly unlikely that we will volunteer, if it happens it will be forced on us one way or another.  It might be time to focus more on the particular rather than the universal and generalised cries for a different world do seem numerous.  Of more interest might be to hear what a modern-day Tom Joad would make of the times; one strength of Springsteen’s writing has always been the ability to focus bigger themes through individual characters.  It’s what makes tracks like, ‘Meeting Across the River’, (the film the Scorcese never made?) and, ‘State Trooper’, so convincing.

‘Picture of Me Dead’, hopes that, ‘If there’s a masterpiece inside / I wish I could find it / If there’s a simple song that rhymed / I wish I could write it’. ‘All I Ever Wanted’, and, ‘Firelight’, also consider creativity and aspiration.  The album finishes on a different note with, ‘In a Moment’, that considers the sudden nature of loss and the fleeting nature of life.   If all else fails then it seems we have nothing left but to, ‘Tell ’em that it’s god’.

This a well-conceived and executed album from an as-yet unsigned trio.  Some of the lyrics here are less than obvious, all of which adds to the interest as they give you pause for thought.  It might be that Law could focus his song-writing less on anthemic polemic and more on individual lives but nonetheless there are pleasing harmonies and solid musicianship.  It’s a true ensemble production where the whole seems more important than the individual parts – there are few if any solos of any length.  The main thrust of the album is not hard to fathom – love, loss, aspiration and creativity and what it might mean to an artist in an increasingly confusing world.  This is all brought to you from far-flung corners of the globe through the wonders of modern technology – and apparently there’s already another set of tunes in the can to look forward to!

Debut in the spirit, but not the shadow, of REM