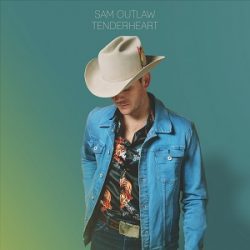 ‘Tenderheart’ is the follow-up to Sam Outlaw’s well-received 2015 debut ‘Angeleno’ and Outlaw picks up where he left off to expand on his laid back, So-Cal country sound. Opening track Everyone’s Looking For Home chronicles the sacrifices and decisions made in pursuit of a music career kicking off with a soft vocal and building into a lush string arrangement and from here onward, you can really hear an artist that has found his sound and hit his stride.

Throughout ‘Tenderheart’, Outlaw wears his influences on his sleeve and in each of the albums 13 tracks those influences shine through; however, it never feels anything but original. Produced by Ry Cooder, ‘Angeleno’ had the accomplished trademark sound of a modern country record but his sophomore effort, which he co-produced with Martin Pradler, has allowed Outlaw to experiment with different genres and expand on that sound – whether trying to remember the name of an old friend in mellow, acoustic number Bougainvillea, I Think or looking for a partner in the traditional, country-tinged penultimate track All My Life, the result is a polished and well-rounded record showcasing a man that isn’t scared to break the mould when it comes to making a country record whilst still maintaining a firm grounding in his roots and progressing his own sound.

Other album highlights include the infectious, handclap-filled Trouble exploring a mischievous friendship and Look At You Now – an intimate, audio note performance included on the album which highlights Sam’s raw talent accompanied by the stunning back-up vocals of long-term collaborator and friend, Molly Jenson. Jenson, however, isn’t the only incredibly talented member of the recording crew and it would be criminal to review this album without mentioning the all-star cast that also contributed to make the record sound as layered and as vivid as it does, a number of which have returned after performing on ‘Angeleno’ – Taylor Goldsmith (Dawes), Bo Koster (My Morning Jacket), guitarist Danny Garcia, Pedal Steel player Jeremy Long and the LA native Mariachi group, Erwin Vasquez and Mariachi Teocuitatlan.

If ‘Angeleno’ was a breakout record, ‘Tenderheart’ could be the breakthrough record which will see him become a household name. With two full-length albums under his belt and an ever-increasing fanbase, Sam Outlaw is making a name for himself as an excellent songsmith and if he continues on his current upward trajectory, he will soon be following in the footsteps of the likes of Jackson Browne or Dwight Yoakam before him, and be regarded himself as one of the LA scene’s greatest exports.