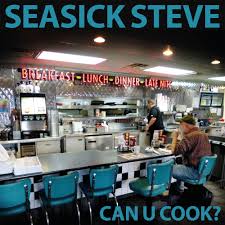 On the official Seasick Steve website, you will find a 38-second video clip in which a hugely self-conscious and apologetic looking Steve stands propped against a water tank alongside a stack of empty pallets at the back of his barn. As far as trailers for a new album go this is just about as low key as it gets, “I don’t know much what to say……. they want me to say something.” A vision of a groaning PR exec with his face in his hands springs to mind.

In the remaining few seconds of the promo he really does do his best PR, confessing to really liking his new record, describing it as his favourite to date and being excited to get out on the road to play it. But maybe with this, his ninth studio album, the man just wants to let his music speak for itself. From the opening thumping guitar groove on ‘Hate Da Winter’ one gets the impression that the man is back on the one stage where he is happy, comfortable and best able to communicate what he is all about.

The title track attacks the senses in much the same way. It is another gloriously loud piece of dirty country blues on an album that has plenty more of the same to offer. But there is more to ‘Can U Cook?’ than that. Slotted inbetween these ear-splitting raucous gems the blues are, as is their wont, pared back and served up in a much more seductive manner with ‘Sun on My Face’, ‘Chewin On Da Blues’ and ‘Get My Drift’.

A distinct couple of departures from this bluesy formula are offered up by way of contrast here. ‘Lay’ is a short little gem presented in a breathy style with electronic backbeats while ‘Last Rodeo’ features harmonica and something that is pretty close to a yodel on a track that is much closer to country than it is to blues. These tracks offer up a change of pace and sound that still manage to sit well within the confines of a lovingly constructed 13 song album.

Seasick Steve may have made one of the great self-effacing promo videos of all time. The album he is apologetically promoting isn’t half bad either.