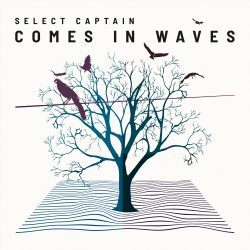 As previously covered in these pages, ‘Comes in Waves’, the latest album from Select Captain (Danes Kristian Gaarskjær and Søren Vestergaard) has been drip-fed to its audience in the shape of three EPs, imaginatively entitled Part I, Part II and Part III, a process which has taken almost a year. Parts I and II have four tracks each and Part III just three tracks, but the whole – the finally released album – is greater than the sum of its parts, as there are twelve tracks. Clever, huh?

A slow-paced, reflective album, this is a personal, almost autobiographical piece, the portrayals of mental health and addiction experiences of Gaarskjær; this is not an album to get up and dance to, certainly. Tales of overwhelming feelings of depression and the fear of anxiety are laid bare from the opener ‘Mind Crashing’ – “It comes in waves”, and in ‘Slow Down’ “It’s a trap/I can’t feel any other way” and “Can’t you see I’m losing it all right now.” The desire to keep in control, to stay calm, the hope of keeping it all together is further expressed in ‘Out of Sight, Out of Mind’.

And so it goes on. Yet there are chinks of light throughout, a sense of optimism, of hope in the future – “I won’t give up just now/I’m not defeated yet.” Lyrically, the songs mainly look back and lay out what it felt like in those dark times of the author’s life, but now there is perhaps a much brighter future. Musically, acts such as Ben Howard and Depeche Mode are cited as influences and some vocal styling and extensive use of synths bear this out. The fusion of electronic sounds and traditional instruments such as cellos and twangy guitars that provide the bedrock for lyrically strong songs make for an interesting final product.

Perhaps this album is what we need right now. Something that helps us all to listen to and understand other people’s problems, such as depression, such as addiction. And maybe there is a brighter future.

The dark days are behind you now, Captain.