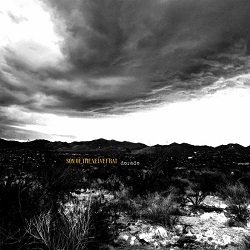 It would be the understatement of the year to describe the torn and ragged instrument that is Georg Altziebler’s throat as “cracked” or “whisky scarred”. It’s a hollow rattling thing that speaks of dry deserts and lonesome travellers. Dark as the shadows in a Sergio Leone movie, dust covered, careworn and heartbroken. And just as it took an Italian film maker to reinvent and renew the Western as a genre, Son of the velvet rat (Georg and wife Helke) have so far made their music in their homeland of Austria whilst still sounding as if they have recorded in a small studio behind a shack somewhere out in the Californian desert. So far…because Dorado is their first album since relocating to Joshua Tree, the most Americana address possible, and it’s been a smart move as Dorado is an inspired album.

Dorado takes a path through dark topics, stalking along like a coyote on the trail of carrion. Shoes, in the world of Dorado, are not scarlet – they are blood red, hinting at some untoward act about to happen in an intense relationship. Love is not something to be craved and celebrated when found, it is the only defence against the woman you shouldn’t be with but are uncontrollably attracted to. And maybe also, literally, the only shield against Satan. That’s the message of the two-headed coin Love’s the Devil’s Foe which shimmys and sways in a half-drunken haze between reality and some supernatural other of voices whispering on the wind. The Spanish guitar intro on Starlite Motel takes us into a troubled world of murder in the dark and escape routes, and more hints of the supernatural – or insanity – as every obstacle is dismissed: “I come up with a go away spell / for the sirens and the trouble bell and the flashing light”.  It’s dark and moody and might just, favourably, remind you of Dylan’s Man in the long black coat.

The album was recorded in just a few days – not that this in anyway is to suggest a slapdash effort, not with a deft producer like Joe Henry on hand to capture lightning in a bottle. There’s an immediacy to the songs, almost as if they’re emerging into the world fully formed from some other place, some dark well of the unsettling, out in the desert. Dorado is the dry Gothic spectre haunting Americana.

An eerie crackling atmosphere of fear, dread, and, if not minor redemption then at least punishment delayed, suffuses the latest album from Austrian band Son of the Velvet Rat.