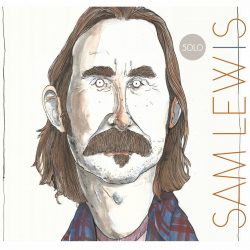 Three albums into a solo recording career Sam Lewis has released a stripped down, lay it all bare fourth called ‘Solo’.  The new release is a presentation of songs from his first three well-received albums, plus a small handful of new material. The album’s simple title emphasises that this is a man alone –  just him with microphone, acoustic guitar and studio audience. Lewis comes with a reputation as a soulful singer and story-teller. Having once been dubbed “a modern Townes Van Zandt” by Nashville heavyweight Chris Stapleton he has left himself no place to hide. END_OF_DOCUMENT_TOKEN_TO_BE_REPLACED

Nashville-based country blues and soul singer, Sam Lewis, begins a lengthy tour of the UK in February next year. Renowned for his rich soulful vocals, well-crafted songs, roots country sound and blue-eyed soul, Sam Lewis has collaborated with such musical luminaries as John Prine and Kacey Musgraves, while Chris Stapleton described him as “a modern Townes Van Zandt”. Sam Lewis’ debut album ‘Waiting On You’ received widespread critical acclaim, and featured support from legendary country guitarist, Kenny Vaughan, along with Darrell Scott, the McCrary Sisters, Gabe Dixon and Willie Nelson’s harmonica player, Mickey Raphael. Although the record was very well received, Lewis’ booking agency got bought out at the time of its release, leaving him with limited opportunities to tour to promote it. END_OF_DOCUMENT_TOKEN_TO_BE_REPLACED

Previous showcases at the AMAUK conference had run for just a single night – expanding to two nights had more than doubled the excitement. And if the previous evening had offered some hard choices then this second night of the AMAUK showcase upped the ante by bringing in Moth Club as a venue, which meant that most time slots now offered a chance of three bands or artists. This cold wet evening started once again at Hackney Empire Bar with the superb sound of The Hanging Stars. END_OF_DOCUMENT_TOKEN_TO_BE_REPLACED