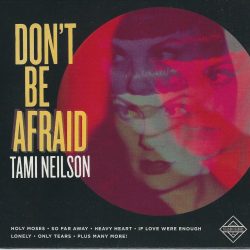 Tami Neilson is a Canadian born, New Zealand based singer and songwriter who has won a host of awards in her adoptive country. Her previous album, “Dynamite”, released in 2014, was one of The Guardian’s Top Ten Country Albums for that year. So, she has form – and she has pedigree; her father was talented Canadian musician Ron Neilson, who was a full time musician throughout his life and Tami’s early experience was with the family band, The Nielsons, touring throughout North America.

With this kind of background you’d expect Tami Neilson to be a solid performer and a good musician – and you’d be right. But this album is an odd mish mash of styles that don’t always play to the singer’s strengths.

“Don’t Be Afraid” is a tribute to her father, who has now passed away, and he was clearly a major influence in the lives of Tami and her brother Jay, who has been the co-writer on many of the albums tracks; and they clearly know how to pen a decent song as the songwriting is consistently good throughout the album – but what this record lacks is a consistency of style. There are elements of country, some rock and roll, some good old fashioned R&B, even some hints of jazz – what there isn’t is any feeling that this is an integrated album.

The album kicks off with title track Don’t Be Afraid, a song with a strong gospel influence that’s well delivered by Tami Neilson’s powerful voice but it needs something more to elevate it than the sparse backing provided by the band; a proper gospel choir could’ve made this a chilling paean to parental love that reaches back beyond the grave, which is clearly what Neilson was aiming for. This is followed by Holy Moly which also suffers from the sparse backing. Tami Neilson has a big voice and needs a big sound to back it. This is a good track but it needs some fire in the music – it’s crying out for a horn section but what we get is a few distorted guitar chords and a gated drum sound that really don’t do the song justice.

Perhaps the best song on the album is third track Lonely, a song started by father Ron some twenty years ago and finished by Tami for the album. It has a very Patsy Cline feel about it and Neilson’s delivery works very well here – she’s not pushing the song so hard and the lusher arrangement suits her voice. The album would’ve benefited from much more of this approach.

This isn’t a bad album but it is a frustrating one. Tami Neilson has an excellent voice and there are some well crafted songs here but, too often, she’s let down by arrangements and instrumentation that don’t really suit the songs and leave them feeling one dimensional.

The Press Release accompanying the review copy said that the album served up “a smorgasbord of styles” but variety sometimes covers a struggle to identify a singer’s true style. Tami Neilson is playing her London debut show at The Islington in London on the 12th September and perhaps her live performance will give these songs, and her voice, the setting they deserve.

A powerful voice and good songs but the album lacks a sense of identity.