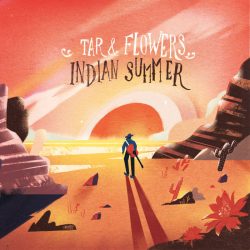 A debut record from the greener, non-plastic reaches of greater Los Angeles. Principally it’s the musical labours of Taylor Hungerford, assisted by French born sidekick Wolf Kroeger. Between them, they’ve cooked up something quite noteworthy. Hungerford’s voice is a half-asleep, folky woozy drawl. There’s influence from a Fleet Foxes or Felice-esque vocal sound perhaps, though Hungerford brings his own distinct flavours to the party. Vocally it’s a fine fit with the ‘folk sliding into Americana’ overall vibe of the record. Acoustic guitars are strummed hard, joined by twangy and fuzzy electrics. Fat bass and heavy percussion give the songs dynamism and drama. Opener ‘Danny’ is a brooding tale of a young man’s passage into adulthood and search for fulfilment. It kicks off proceedings in fine style. ‘Summer At Michael’s House’ has an acoustic Neil Young vibe, added to by bass drum thumps and slide guitar soaked in reverb. August has a similar vibe.

Hungerford’s words aren’t always the clearest – you could say that it adds to the air of misty mystery and foreboding uncertainty. ‘Ten Ton Heart’ has a more poppy guitar sound, yet still underpinned by the impressive downbeat voice of Hungerford. ‘This Machine’ is more straight-up folky – alluding to some great automaton that has always controlled the world. Closing track ‘The Lovin’ Kind’ is classy in a Byrdsy Ballad of Easy Rider mould. It’d have McGuinn searching to see if he actually wrote it (or borrowed it from Dylan).