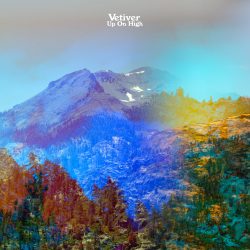 A few ready guides spring to mind that could be used as a quality yardstick to help broaden listening habits and experiences. How about exploring any album produced by Rick Rubin, or collaborations with Dan Auerbach? Or, what about making it a point to listen to any artist signed to Loose Music. Loose must surely have, pound for pound, one of the best rosters of artists you may care to find. And so, welcome to the first album for the label by Vetiver. Hailing from San Francisco and largely a vehicle for the talents of Andy Cabic, Vetiver have been releasing albums since 2004 with ‘Up On High’ being the band’s seventh release. Cabic has been moving around labels for most of his career including a brief spell with Sub Pop, but this release feels like he has laid his hat and found his home.

Vetiver have their origins in the freak folk scene, driven by Cabic’s friendship and collaborations with Devendra Banhart and Joanna Newsom, the latter attracting attention when she released ‘Ys’, her Harp driven progressive/chamber folk offering. All of which is to say that if freak folk is not the sobriquet to attract your attention, in the case of ‘Up On High’, let the Loose Music association be your guide. In truth, none of Vetiver’s previous albums encompass the esoteric as much as Banhart or Newsom’s records do. Although the 2015 release ‘Complete Strangers’  was described by Pitchfork magazine as the band’s “most diverse, as they move from light funk to power pop to folk rock to gentle tropicália”, even then it felt more like recognisable songs with some added experimental electronica. Not everyone’s cup of tea maybe (though actually well worth a listen), but never off the scale eccentricity. It is more like previous albums never felt like a complete balanced meal. This time Vetiver hit a high; the stars align here for an album which fits perfectly with Loose’s aspirations as the premier avenue for Americana and alt-country releases.

Cabic clearly has a bent towards the kooky, but there is nothing on ‘Up On High’ which will scare the horses. On the contrary, this is a forty-odd minute trot through some very, very pleasantly familiar country-side. Which may sound like a tip of the hat towards good ‘enough is good enough’, but really isn’t. It’s an acknowledgement that we are all simple folk at heart and very often giving us what we want really is the key.

Whereas previous albums have been in comparison uneven, ‘Up On High’ delivers consistency. And, happily, it is a consistency of very high quality with tight and focused compositions. The music is sumptuous, in places, like ‘A Door Shuts Quick’, the orchestration strikes a perfect relaxing, easy listening mood. At other times, and this happens pleasingly often, the work recalls ‘Reckoning’ era REM. Instead of Stipe’s sometimes nasal delivery, however, Cabic has a voice like comfortable slippers; it soothes and reassures. Lovely stuff. ‘The Living End’ and ‘Wanted, Never Asked’ have the kind of guitar rhythms and fills that is pure Peter Buck at his best or Real Estate at their most exciting. These are tracks that will compare against anything you will hear this year. The title track melody flirts with Billy Braggs’s ‘Waiting for the Great Leap Forwards’. In the nicest sense this album is a big step for Vetiver. All things being equal, this should be the release that gets them a wider audience.

The album that should bring Vetiver many more listeners; wonderful songwriting excellently delivered