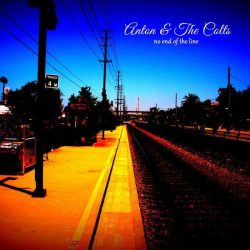 After four years of gigging around Scotland, Anton & The Colts decided to release their debut album last September. ‘No End of the Line’ draws on various influences with bluesy guitar riffs and a bit of soul but truly sticks to their Americana angle. The 4 piece line up of Anton O’Donnell, Roscoe Wilson, John Dunlop, and Dillon Haldane have certainly provided a tight sounding set of tracks, from a band that has played a lot of live gigs and it shows with the musicians easily blending together to produce a fairly authentic sounding Americana album.

The track ‘Rock ‘N’ A Hard Place’ is a definite Rockabilly toe-tapper; it is easy to imagine this song being a firm favourite during the band’s live set – it would certainly get the crowd up dancing.

The track of choice would be the opening track on the album ‘Alright.’ It highlights Anton’s voice and the group’s musical harmony, giving a very well produced sound between instruments. Backing vocals from Anne Dunlop are very effective and provide a lighter balance to the song. Her contributions on three of the other songs are also very welcome.

Overall a reasonable debut album showing a range of influences from the blues to a very Neil Young harmonica sound on ‘Weekend Millionaire.’

A solid start for a debut album