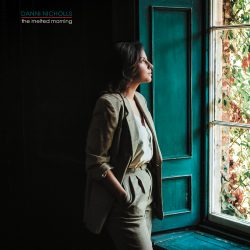 Danni Nicholls has been recording music for a decade now, and ‘The Melted Morning‘ attests she is at the top of her game. This third studio album keeps all the good ingredients of her past releases, most notably a punchy songwriting style and a velvety production, while highlighting the daintiness that she radiates elegantly.

The eleven tracks of this mostly female-made album unfold with grace, like a slow motion dive into the songwriter’s visions. They depict a chiaroscuro painting of fears and hopes, and offer some witty perspectives on the force of adversity (‘Lemonade‘). Nicholls’ voice sounds always just, sometimes delicate and feminine (‘Wish I Were Alone‘), sometimes raw and soulful (‘Hear Your Voice‘). The vocals are adorned with a perfectly executed orchestration by Nashville producer Jordan Brooke Hamlin (Indigo Girls, Lucy Wainwright-Roche). Her approach is clearly of the less is more variety, which serves Danni Nicholls’ musical introspection really well. The vocals glide along with layers of cello, horns and keys, merging into a blanket of sonic warmth that makes ‘The Melted Morning‘ felt as much as it is heard. A polished dark gem coming from the bottom of the heart.

A polished dark gem coming from the bottom of the heart