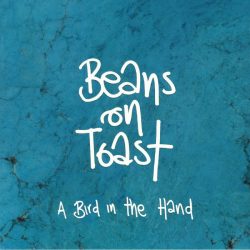 Beans on Toast or Jay McAllister has been honing his craft for many years and ‘A Bird In The Hand’, his 10th release in as many years, followed tradition was released on his birthday just like he had done with the nine studio albums before it. It seems as though the years have served him well as although he isn’t breaking the mould he made for himself, this might just be his most accomplished release yet.

Hailing from Braintree in Essex with an almost-cockney accent, McAllister has carved out his own space in the singer-songwriter genre utilising simple instrumentation (predominantly acoustic guitar) and a unique vocal delivery combined with an innate talent for telling stories through song and with each album being a snapshot of the year it is released, the albums are a chronological musical timeline of his life. ‘A Bird In The Hand’, recorded with Ben Lovett, who produced his first album a decade ago, is a continuation of the timeline however, this time around, McAllister has recently become a father and with that, the lyrical content has become more of a personal exploration of that journey without sacrificing any of the identity he has formed over the years.

‘Another Year’ opens up the record, aptly focusing on the process of ageing and looking back and serves as an introduction of sorts to this ‘chapter’ in the story and is a hopeful song about appreciating the little things in life from an almost whimsical perspective. ‘Magic’ is written like a letter to his newborn daughter and is as honest as Beans’ has ever been as he vocalises the fear and joy whilst ‘Here at Homerton Hospital’ celebrates different NHS staff and the use of names throughout the song brings the characters to life and whether they are real or not, the brief background to each person is so believable that it doesn’t matter as the story is so captivating – a true testament to the power of the words in the song and the highlight of the album by a country mile.

‘Alexa’ is a cynical view on the popular household item and contains bags of humour touching upon advertising, data spying and a humorous comparison of an Amazon Warehouse to the Amazon jungle and is an upbeat and lyrically entertaining song which breaks up the autobiographical flow of the album but provides both diversity and a throwback to previous records which perhaps focus more on cynicism than the sentimentalism present here. ‘Watching The World Go By’ is a breezy track, again, touching upon the smaller things in life and points towards a change in perspective for the new father and ‘Miss You Like Crazy’ is a laid back track with a swinging drum beat and another ode to his young daughter. Whilst not lyrically outstanding, at least when compared with the rest of the record, the song tells a story and is a very honest portrayal of McAllister’s feelings – something which he is so good at putting into verse. As the record draws to a close, there is a recorded sound of his daughter which is the perfect way to end this chapter in the story and leaves us hoping for the next ten instalments.