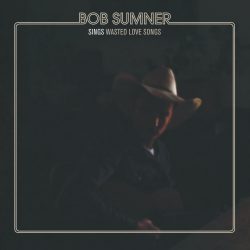 Bob Sumner is used to rocking out with his brother as one half of the Sumner Brothers, but this debut solo release finds him in a more reflective mood. The folk-based Americana of ‘Wasted Love Songs’ covers the classic themes of love, loss, loneliness and being worn down by the world. Although that sounds a little bleak, these mature narratives are made palatable by arresting imagery, fine musicality and sophisticated song writing craft. It’s a thing of beauty.

Throughout the album, Sumner expertly blends classic acoustic instrumentation with good rhythms, evident in the opening track, ‘Riverbed’, which sets the tone for the album. It starts with a strong beat before the acoustic guitar and keys introduce Sumner’s effortless, understated vocal. The intimate poetry of the lyrics turns this song into a hymn for perfect imperfect love.

‘Riverbed’ sets the tone for the record and Sumner doesn’t deviate much from this blueprint in terms of style, instrumentation or pace. In some albums, lack of variation can be a flaw but here, thanks to the quality of the song writing, the result is simply a consistent mood, ensuring that this is an album to be enjoyed in its entirety, a coherent piece of art that works as a whole without sonic or emotional distractions.

Of course, with repeated listens, the subtle variations become apparent. ‘Riverbed’ is followed by the more traditional, finger-picking sound of ‘All Your Dead Things,’ which introduces the character of Rosalee and her dead-end relationships; she returns later in the album with a song named for her. It is full of vivid images, such as the heart-shaped rocks and stones Rosalee collects. Sumner’s poetic flair continues in ‘A Thousand Horses,’ in which he sings: “The running of a thousand horses, tearing the prairies apart / Is but a murmur and a whisper compared to the beating of my heart.” Like many of the songs, it is underpinned by gentle layers of instrumentation, expertly produced by Erik P.H. Nielson, who blends organ, piano, pedal steel, strings, drums, bass and synths throughout the album to create a deep, full sound.

Up next is ‘New York City.’ There have been so many songs about the Big Apple that it takes something special to justify the song title. Sumner finds it in this album highlight, thanks to the beautiful melody and vocal and intelligent lyricism. The story of long-distance love is told through the eyes of both lovers with a clever switch of narrator halfway through the song. Sumner builds the song to a gentle climax; it is, perhaps, the best example of his sense of pace and timing and his ability to create and release narrative and musical tension. The contrasting follow-up is the more upbeat and radio-friendly ‘Comin’ Around.’

The remaining tracks all have plenty to offer and bear repeated listening. The album closes with the atmospheric vocal and delicate guitar picking of ‘Ticket to Ride,’ which follows the forlorn narratives of characters looking for a way out. Sumner’s gentle, refined voice has the quality of a storyteller and he has an ear for excellent vocal melody.

Bob Sumner’s intention was to return to his folk-roots and create: “…an album that someone could just put on and unfold into.” On ‘Wasted Love Songs,’  he has succeeded in producing a set of timeless ballads.