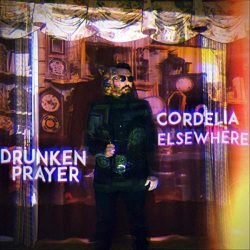 Drunken Prayer is the solo project of alt-country band Freakwater guitarist Morgan Greer, and ‘Cordelia Elsewhere’ is the sixth full length release under this moniker – returning with the backing band following last year’s predominantly acoustic release ‘Morgan Greer’s Drunken Prayer’. From the outset, there is a noticeable sonic departure from Greer’s work with Freakwater as the country sheen is dropped for some all-American music. Taking influence from his time growing up travelling the country with his folk-singing mother, living in different areas of the USA, soaking up music wherever he goes, the end product has a feeling of authenticity in terms of the honesty of the songwriting and the overall sounds throughout.

Opener ‘Into the Water’ is a great introduction to the record – a high energy track with a great vocal performance and a brilliant rhythm section demonstrating the tightness of the band performing on ‘Cordelia Elsewhere’ as the instruments weave perfectly with each other, allowing space for each to be heard which is evident throughout the entire record. ‘Rubble and Dust’ is reminiscent of last year’s acoustic release but with the added bonus of some subtle instrumentation in the form of pedal steel, electric guitar and some light drumming which works really well to add extra emotion to the track.

Album highlight ‘Science’ is another rhythm led song with a dark undertone and is vocally, the best performance on the album with Greer spitting out the lyrics rapidly with purpose and sincerity on top of an intense drum beat and western guitar riffs. Following shortly after is ‘It Happens All The Time’, another upbeat track with a frantic energy and a catchy hook, however, here is the where the guitar comes to the forefront with jagged, jangle chords and spontaneous riffs littered throughout.

With each release, Drunken Prayer finds a firmer footing in their sound, borrowing less from their influences and forging their own path particularly through their use of the full band, however, Morgan Greer’s authentic, passionate vocal performance and experimentation with different aspects of American music contributes greatly to this, setting him apart from his contemporaries. ‘Cordelia Elsewhere’ is a fantastic collection of songs from a band that seem to get better every time they get in the studio.