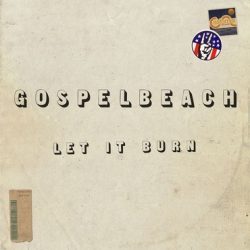 ‘Let It Burn’  is the third studio album from GospelbeacH, the LA based band led by singer-songwriter, Brent Rademaker (formerly of Beachwood Sparks), and the follow up to ‘Another Summer of Love’ (Shindig! magazine Record of the Year 2017). Making a major contribution to the album is guitarist Neal Casal, best known for his work with Ryan Adam’s Cardinals, who sadly passed away aged 50 in August this year, having rejoined GospelbeacH for this record, and his virtuoso playing is a strong element of this album.

‘Let It Burn’ features strong melodies with a dreamy, almost trippy vibe, reminiscent at times of Beck circa ‘Mutations’, notably on closing track ‘Hoarder’, but still rooted in an unmistakably West Coast sound, with prominent acoustic guitar allied with keys.

Rademakers’ high register vocals have echoes of Ray Davies, or Marc Bolan in his softer moments, well suited to the timeless ’60s/’70s pop feel, which features mellotron prominently on tracks including the anthemic album opener ‘Bad Habits’ and ‘Get it Back’.

Lyrically the songs have a reflective tone, typified on ‘Get It Back’ (“Where have his dreams all gone / He turned around and they faded”) and ‘Let it Burn’ (“I waited so long / for something to change/ I waited on a  feeling / I just can’t explain”).

Casal’s guitar shines through the album, ranging from his powerful solo work on ‘Bad Habits’ calling up the spirit of Quicksilver Messenger Service, or perhaps Man to the melodic phrasing of ‘Unswung’, the rockier riffs of ‘Dark Angel’ and ‘Nothing Ever Changes’ and atmospheric fills and powerful outro on ‘Get it Back’ and ‘Fighter’.

Universally strong songs range in tempo from the lazy ballad pace of ‘Baby Its All Your Fault’, ‘Get it Back’ and ‘Fighter’, through the mid paced ‘Bad Habits’ and ‘Let it Burn’ to the up tempo songs including ‘I’m So High’, the poppy ‘Unswung’ and rockier ‘Nothing Ever Changes’.

An excellent album, and a fitting tribute to a great guitarist at his peak.