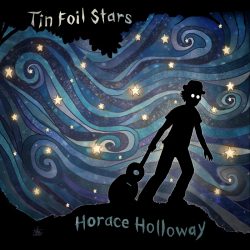 ‘Tin Foil Stars ‘ is the debut five track EP by Florida based Horace Holloway, the recording alias of Jeffery Morrison, and a very promising debut it is too. Featuring strong support from players including Caitlin Cary (Whiskeytown), Neil Franz (Gram Parsons, Emmylou Harris) and Brett Williams (Mighty Joe Plum), the EP is characterised by strong song writing, often introspective but with a positive take reflected in mostly up tempo and up beat arrangements, which are at their strongest when augmented on the opening track ‘King of Diamonds‘ by Morrison himself on harmonica, by sideman Mark Robertson-Tessi who plays very tasty mandolin on ‘Paper Heroes’, and by pedal steel player Neil Flanz.

Lyrically there are some memorable lines – on ‘Paper Heroes’ we hear of “temporary people living temporary lives”, while on ‘White Winter Heart’ “you wanted to change the world but the world changed you” and “you don’t want the second verse to end the same way as the first”.

The outstanding track, the upbeat opener ‘King of Diamonds‘ uses the analogy of a deck of cards for the uncertainty of love, with carefully crafted lyrics well matched to the light and bright arrangement.

Produced by Joe Rodriguez (A Flock of Seagulls), the pace and feel changes to a more Neil Young-like rock vibe on the slower paced ‘Love and War‘, and to the ballad styling of the closing track ‘White Winter Heart‘, giving the EP a contrast maintaining interest to the end. A follow up full length album is awaited with interest.