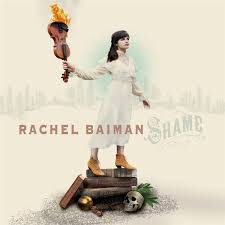 It’s been a while since Shirley and her illustrious Company castigated us (rather unjustly) for our collective inability, or flat refusal, to dance, declaring this to be a damn Shame, Shame, Shame. Anyone missing such admonishment should check out Rachel Baiman’s excellent new album. Shame may be on the agenda again, but this time the target of ire isn’t discotheque wallflowers, but the purveyors of organised religion: to be more precise, the tenets of the Church, which Baiman believes inculcate negative feelings of shame from birth onwards with concepts like Original Sin.
Baiman, a native of Chicago, but who has resided in Nashville for many years, enlisted the considerable talent of Andrew Marlin from Mandolin Orange to produce Shame, along with myriad contributions by the equally gifted Josh Oliver, after obsessively listening solely to records recorded in North Carolina. She subsequently spent three days recording at The Rubber Room in Chapel Hill. “The energy was amazing,” Rachel recalls, reliving the unique feeling of camaraderie and enthusiasm that made this a feel good session, the resonance of those vibes bursting out of every groove on this album.

Shame is worth the price of the CD for the Gillian Welch-esque, but Michael Bowman composed, masterpiece Wicked Spell; on top of that delight, every other track is a bonus. It features a divine vocal from Rachel and engaging harmonies on the chorus and some delicate mandolin and guitar-work throughout from Marlin and Oliver.

Rachel opens her heart on Thinkin’ On You, a sweet song of longing with the line ‘I could only be further from you if the world wasn’t round’ obviously missing her honey in Nashville whilst up in those Appalachians, as Andrew and Josh support her dulcet tones and distract her from her heartache with some intricate mandolin and organ that bring The Band to mind.

Let Them Go To Heaven features some material from author and former poet laureate Ishmael Reed’s incredible poem When I Die I Will Go To Jazz where he imagines heaven as a kind of nightclub, which Rachel has deftly melded into her beautifully arranged song with some delicious piano from Oliver and scintillating choir-like backing vocals from Emily Frantz and Libby Rodenbough, who Baiman describes as “two of the smartest and most fashionable women I know.”

‘Let them go to heaven/let them go to hell/if on earth I cannot last/I want to go to Jazz/don’t surround me with cherubim/and their curled yellow locks/a place where there’s no vodka on the rocks…Let them go to heaven/let them go to hell/when my body leaves my soul/take me to rock and roll/don’t surround me with endless joy/uninterrupted and calm/a place like that I wouldn’t know what to do with/a snare, a kick, or a tom/spare me the saving from my unholy life/I can’t hear that guitar burn if I can’t feel the strife/what use are angels singing sweet soft hymns?/when I’ve got rock to roll away my sins/I’ve got rock to roll away my sins.’

Amen to that, Sister! The song prompts the eternal question: what do you suppose heaven will be like when you get there? What would you like it to be? Jorge Luis Borges used to say “I have always believed that paradise will be a kind of library.” I’d be happy if his, Rachel’s or Ishmael Reed’s idealisation of heaven turned out to be correct. Or, better still, a combination of all three.

In his remarkable book The Complete Muhammad Ali Ishmael Reed says it’s a crying shame that Ali wasn’t encouraged to retire earlier than he did, because of the unnecessary punishment and consequential suffering that he endured from Parkinson’s disease. Reed cites Thomas Hauser, a sports journalist and boxing specialist who counted the number of punches Ali took at each of his fights. During the first Sonny Liston encounter, Ali received twelve blows, during the second Liston bout, Liston only landed two; by the time Ali fought Joe Frazier at the ‘Thrilla In Manilla’ his battered body received four hundred and forty brain-shaking punches!

One thing that Rachel Baiman shares with Muhammad Ali is a tenacious outlook and the ability to stand her corner and fight. Perhaps this attribute comes from her parents, one being a social worker, the other a radical economist. “If I wanted to rebel against my parents I would have become a finance banker or a corporate lawyer,” she jokes. Baiman recently founded Folk Fights Back with fellow musicians, violinist Lily Henley and cellist, Kaitlyn Raitz following the 2016 presidential election contest.  Folk Fights Back is a musician-led organisation that “seeks to raise awareness of critical issues and to fund other organisations, actively fighting for social and political change through fundraiser concerts.”

They’ve held three gigs so far with all the proceeds going to non-profits, providing support for the rights of women, plus the environment, and immigrant and refugee rights. Folk Fights Back is seeking help from volunteers and musicians willing to participate or host a show. Rachel says they will continue to do their work regardless of political outcomes and whichever administration is in charge because “there’s always work to be done.” She enthuses: “I love the political tradition of folk music, from Woody Guthrie to Tupac, and my hope is that this record adds another voice to it.”

Those who are concerned about Baiman’s other musical project 10 String Symphony should worry not. They will also be getting back together at some point in the nearish future, after Rachel has finished delighting and tickling the conscience of concert goers with this album. Coming to a gig near you, soon. It would be a real shame to miss her.