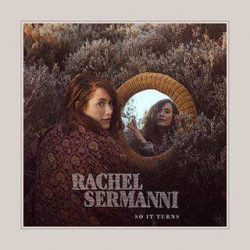 Breaking out of Scotland, Rachel Sermanni gifts us her 3rd full length release ‘So It Turns’. Sermanni opted to release this record independently after previously working alongside Rough Trade Records and Middle of the Road Recordings. In her previously released albums, Sermanni incorporated darker and grungier sounds compared to what we’re being treated to this time around.

Opening up with ‘Put Me In The River’ Sermanni’s voice glistens through beautifully and really sets us up for what we can expect throughout the record. Coming into the back end of the track the drums come in with a strong backbeat bringing the intensity built up throughout the track to a head. ‘See You’ And ‘If I’ show off Sermanni’s full band, and highlights the strengths that the band bring to the album. ‘What Can I Do’, the lead single off ‘So It Turns’ returns to Sermanni’s previous signature sound. Written just as Trump has been voted into office, the dark and gothic feel of this track adds a new aspect to the overall sound of the album. Heavy, blues rock driven guitars pump power into the track, portraying the feeling of anger and disbelief.

What really comes across on this album is the attention to detail that Sermanni gives each and every track, both musically and topically. Nearly each and every track has a well thought out meaning, no stone is left unturned which leads to a deep and touching album being recorded. Topics include long-distance friendships, questioning one’s life and beliefs and the journey of love throughout the different stages of your life. The track ‘If I’ was writing during Sermanni’s time at the Samye Ling Monastery.

Album title track ‘So It Turns’, the prequel to the second track ‘See You’ closes the album on a soft and emotional note. A shimmering piano solo fades out the album in a truly inspiring fashion. The perfect way to end what has been such a positively delicate musical journey.

‘So It Turns’ has got to be on your Top 10 list for 2019. Sermanni’s vocal is just gorgeous throughout, her gentle tone just grabs you song in, song out and makes you keep listening. It just doesn’t get old.