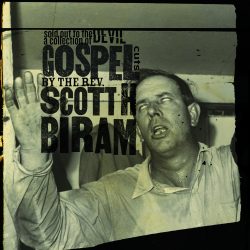 Hailing from Austin Texas, Scott H. Biram brings a distinctive elemental country blues sound to his latest album, ‘Sold Out to the Devil: A Collection of Gospel Cuts by the Rev. Scott H. Biram’, on which he plays all instruments and provides both lead and backing vocals. As the title suggests, this is a collection of songs with a strong gospel thread, but we are in the realm of struggles for salvation more than simple praise for the Lord.

The majority of tracks feature heavily distorted vocals, which create an atmosphere of field recordings in a dusty cabin, many tracks featuring spare acoustic guitar and simple percussion from a tambourine. Within this framework, though, the ten tracks are a varied set, ranging from the driving acoustic guitar of the opener ‘Get me Religion (Preachin’ the Blues)’ and ‘Been Down Too Long’, to the gospel vocals with simple tambourine accompaniment of ‘True Religion’.

The latter also features a ‘radio style’ intro and outro, while closing track ‘Amazing Grace’, one of two traditional song covers, includes rainfall in the background behind the sparse vocal and harmonica arrangement. The second cover,  ‘John The Revelator’, adds some tasty slide guitar to a gospel delivery. Harmonica also features prominently on ‘God Don’t Work (Like a Natural Man)’, alongside vocals with finger clicks providing percussion.

The stand out track, ‘I See The Light‘, is an epic seven-minute uptempo boogie in the spirit of John Lee Hooker, with relentless electric guitar, insistent tambourine, and ‘call and response’ backing vocals.

Completing the mix of arrangements are ‘When I Die’ , ‘Gotta Get to Heaven’ and ‘Broadminded’, which have more of a country feel, with a second guitar adding some’chicken pickin’ licks, and on the last of these a cleaner vocal sound.

A very characterful collection, with varied arrangements and tempos, maintaining interest through the album.