Fast becoming pretty much an essential date in any Americana fan’s festival diary these days, the Static Roots Festival in Oberhausen, Germany this coming July announced its first performers just before Christmas. Dietmar Leibecke, festival organiser and promoter, appears to have got his line up pretty spot on so far, with two of the acts announced both in the running for UK Album of the Year at the AMA-UK awards later this month – Pete Gow for ‘Here There’s No Sirens’ and William the Conqueror for ‘Bleeding On The Soundtrack’.

Further details of other acts due to appear at the festival should be announced later this month. More details of those already scheduled appear below:

Pete Gow & the Siren Strings. It’s been a pretty momentous year for Pete, with the plaudits for his album, ‘Here There’s No Sirens’ when it was released in April, echoed by the number of critics who’ve unsurprisingly featured it in their end of year best album lists. And it’s a record that can only be truly appreciated live with the full blown orchestral accompaniment of the Siren Strings, so another opportunity to see the album performed in its full glory feels like a major coup for the festival. Awash with strings and piano, ‘Here There’s No Sirens’ is undoubtedly Gow’s boldest endeavour yet and one that provides arguably his greatest triumph. Perfectly summed up by Americana UK’s review where we said it was “a deeply personal and intimate set of songs with some great lyrics and astute musicianship, all recorded wonderfully and delivered with heart”. Released back in April 2019 Gow has already ‘accidentally’ recorded a new album, ‘The Fragile Line’, which has only been available for sale at live gigs, although it’s due to get a digital release through Clubhouse records on January 17th. Essentially a companion piece to ‘Here There’s No Sirens’, many of the songs on what is an extended EP prove to be its equal. Highly recommended if you can get hold of a copy. Pete Gow and the Siren Strings will also perform a brief 30 minute set at the AMA-UK showcase on 28 January.

William The Conqueror. West country trio William The Conqueror have been making steady inroads on the Americana scene for a number of years now and their reputation was greatly enhanced with the release last February of their latest album ‘Bleeding On The Soundtrack’ (Loose) which was met with great acclaim and is deservedly shortlisted alongside albums by Yola, Ida Mae and Pete Gow for ‘Album of the Year’ at the Americana Music Association UK awards. The band is headed by singer-songwriter Ruarri Joseph, alongside his close musical conspirators Harry Harding (drums) and Naomi Holmes (bass). Joseph released a number of albums ten years ago under his own name and was quite a favourite on the folk scene, but William The Conqueror are altogether a different beast. Blues-driven riffs, building beautifully to full-on glorious crescendos, this is a band that utilises all three musicians to their full potential. Their sound is simple yet completely mesmeric. There is a certain bond between these musicians that has clearly been built on the road. While ‘Bleeding On The Soundtrack’ has met with high praise, their live shows are also wowing audiences and helping steadily to build their fan base. AUK said of a performance back in May 2019 that, “In the modern era of music streaming, where all but the super successful appear left with endless touring as a way to make a living, it’s proving ever harder to tip whose likely to succeed. However, William the Conqueror appear better placed than most – with their combination of rock, indie, Americana and grunge – to break through to the mainstream.”

Curse of Lono. It’s hard to credit that it’s been little more than a year now since Curse of Lono were announced as winners of the Bob Harris Emerging Act of the Year award for 2019, as so much seems to have happened to the band since then, including the release of their ‘4AM and Counting’ live album, alongside countless shows, including performances at AmericanaFest in Nashville, which have seen their self-described brand of cinematic southern-gothic-alt-rock steadily growing in popularity. Back in December 2018 Americana-UK said: “There’s no doubt that they have achieved a unique “Curse of Lono” sound which is based on Felix Bechtolsheimer’s slightly deadpan and clearly English-sounding vocals, the wonderful array of sounds teased out on guitar by Joe Hazell and the pulsating and often slightly menacing rhythm and percussion laid down by Charis Anderson (bass and vocals) and Neil Findlay (drums) along with Dani Ruiz Hernandez (keyboards and vocals). Hazell is described by Bechtolsheimer as “our secret weapon” though as of autumn 2018 the secret seems to be out.”

Native Harrow. Devin Tuel and musical partner Stephen Harms are the duo, Native Harrow. Based in Upstate New York, classically trained singer Tuel spent almost 20 years as a ballerina, a discipline apparent in the grace in which she crafts her melodies and vocals, both of which evoke a 1970s Laurel Canyon feel. Of her third album, ‘Happier Now’, the first for Loose, Americana-UK said: “Let’s get straight to the point. This is a captivating, almost mesmeric album of the highest quality…’ Happier Now’ was tracked live over three days in March of 2018 at Chicago’s Reliable Recorders as Tuel, her bandmate Stephen Harms, along with Alex Hall who provided the vintage mics which help give the whole album a feel of the 1970s Laurel Canyon folk era. But it’s not just a throwback to bygone days; this is a fresh new vibrant voice for today….Devin Tuel’s work is very original and yet strangely familiar at the same time and if she continues in this groove and producing music of this standard then there will be more great things to come from this hugely promising artist.”

Vandoliers. Another US act, all six band member of this Dallas-Fort Worth troupe have a “VFFV” tattoo (Vandoliers Forever, Forever Vandoliers). Now that’s a sign of commitment, which we said was evidenced immediately through the raucous enthusiasm of their latest album, ‘Forever’ “which is noisy and driven”. “Their first on Bloodshot, the accompanying big push from the Chicago based record label is inevitably going to break their sound through…This brand of Tex/Mex blows that away, blending cowpunk – Old 97’s an acknowledged influence – with fierce fiddle and plenty of horns, the mariachi on red dirt giving half the songs a distinctive spin.”

Gabi Garbutt & The Illuminations. Perhaps the wild card for the festival, which isn’t wholly comprised of acts that fall under the Americana heading (the Wave Pictures were an example of an indie band last year who were a terrific addition), Gabi Garbutt & The Illuminations have been described as an uplifting blend of northern soul, punk, alt-folk and rock’n’roll, her expressive, captivating performances backed by the pulsating electric sounds and sweet harmonies of her band. Gabi Garbutt only released her debut album, ‘The Discredited Language of Angels’ last November – recorded at Edwyn Collins’ studio in the Scottish Highlands, where producer Sean Read, keyboardist and guitarist of the Rockingbirds and Dexys’ Midnight Runners, added the final touches. The album has clearly made a big impact on the people at Static Roots, however, as they announced that while they don’t do end of year polls, if they did, they can guarantee this album would be near the top – if not at the top! To quote them: ”If the festive time isn’t bringing you enough joy then this album is bound to light up your life”. 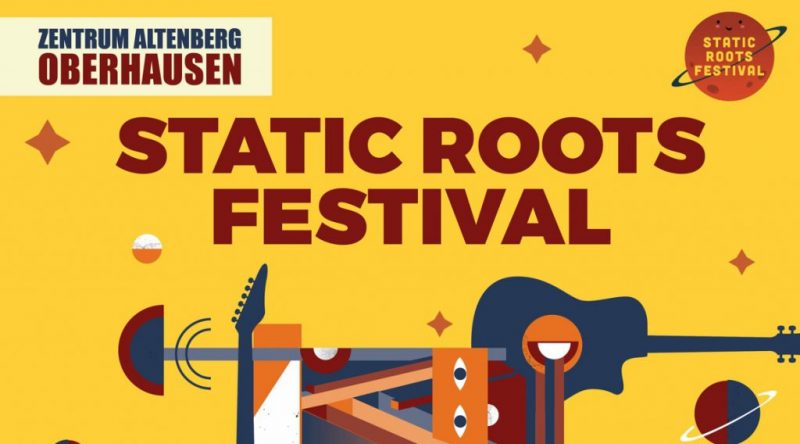