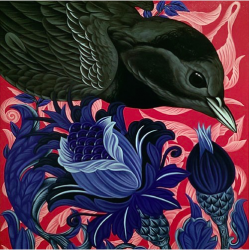 After a decade working as a minister Stuart Smith has returned to music, presenting us with a reflective set of songs about life, family, and his own personal journey into a new world. The record is musically diverse and interesting, with sparkling pedal steel, laid down by Nashville veteran Cowboy Eddie Long, being a particular highlight. The instrumentation complements Smith’s songwriting chops, and helps what may otherwise be fairly run-of-the-mill efforts to pop.

The title track ‘Warhorse‘ is ‘Prisoner‘ Ryan Adams by way of Petty and Springsteen, with big reverby guitars, jangly lead and driving drums. It’s a solid and catchy number, but Smith doesn’t quite pull it off. Where he really comes into his own is the softer numbers where he is given space to deliver his introspective and thoughtful lyrics without fighting to be heard. A particular standout is ‘Esmerelda‘, a song with comparably stripped back production; Smith sings over a strummed acoustic, pedal steel fills brighten up the breaks and a simple indie-folk drum shuffle drives the whole thing along.

That being said, Smith also has a clear talent for the experimental, and it’s a shame this isn’t  explored more in the album. The final track ‘Hummingbird‘ is fantastic. Opening with a single violin line drifting above an echoey sitar, it surges and drifts along, adding in plucked strings and more pedal steel, building to a typically whistleable chorus. Eventually it fades into a wonderful melting pot of sounds for the final couple of minutes; driving drums, sitar, and harmonica being the canvas for pedal steel and electric guitar solos. It sounds big and it absolutely works.

Overall, this is a solid record from an artist with a clear songwriting talent and love of Americana. However, his strengths lie in his ability to push the artistic envelope and play with genre conventions; something which will hopefully come to the fore in future projects.

A solid solo debut with a few flashes of brilliance