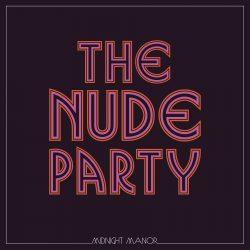 It seems like a long two years since the release of their eponymous album, so it is a considerable relief to find that The Nude Party have lost none of their enthusiasm despite relocating to a farm in the Catskills and spending a huge amount of the intervening time on tour. Their latest release swaggers into the room with the self-assured sound that only a young band can make, this is not a thing that can be easily imitated – somewhere along the way age mitigates the optimism. They continue to generate their own classic rock and roll sound, with just the right amount of indie influence to impart a sense of development and continuity. If you dissect their efforts, the most obvious comparisons are to the Rolling Stones, the Velvet Underground and glam era T. Rex or Bowie with a smattering of country-rock steel guitar on top.

The opening song ‘Lonely Heather’ positively launches in with a rock and roll piano intro before being swiftly overtaken by a driving glam rock guitar groove. At only two minutes, this song is not hanging around. ‘Pardon Me, Satan’ is honky-tonk piano and steel guitar with an irresistible bright feel. ‘Easier Said Than Done’ reverts to classic T. Rex in their heyday. ‘Shine Your Light’ eases up temporarily from the overall pace. ‘Thirsty Drinking Blues’ maintains their characteristically upbeat sleazy rock and rock feel. ‘Things Fall Apart’ provides a touch of melancholy to the mix before the album closes with ‘Nashville Record Co.’ an ironic acoustic commentary on the country music industry.

Their touring endeavours have imparted a tighter band feel than was evident previously and they have become a bit more indie while managing to retain their own distinctive approach. This album like their last, imparts real joie de vivre. Although their output may appear effortless from the outside, this album incorporates “all the stress and pressure and internal dynamics and personal turmoil” the band have experienced over the last two years. “There had been no creative outlet for all of that until we finally got down to writing again. It felt like a release of built-up tension with this record”. The result is highly recommended and will surely provide some of the recognition they deserve.