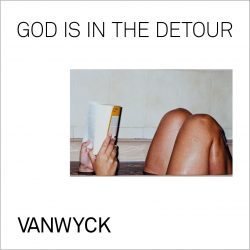 Following experience in various bands, Christine Oele decided in 2015 that the way forward for her was to become a solo artist. Taking her grandmother’s maiden name, VanWyck, she released her debut album, ‘An Average Woman’ in 2018 followed by, ‘Molten Rock’ in 2019. VanWyck’s latest release presents the listener with a beguiling collection of mainly acoustic-based songs decorated with lyrical flourishes.

The opening title track, ‘God is in the Detour’ refreshingly features a female as the titular protagonist and concludes that plans and purpose are all very well but the really interesting stuff happens when you lose track of time, drift away and become open to spontaneity. ‘Your Favorite Tune’ was written in homage to a close friend who tragically passed away from a brain tumour; the song is a moving testament to the value of love and friendship.

There is a quiet, meditative atmosphere to the album as a whole to which, ‘I Wish You Well’ is no exception, bringing subtle, understated instrumentation to reflections on departure in a relationship.

‘The Garbagemen’ brings a yearning for release and wistful melancholia to the listener where the garbagemen, “Ride the truck like its an ocean wave”. As the journey through the album progresses, ethereal backing vocals, quiet piano and strings merge with VanWyck’s velvet-like vocals. There is a fragile vulnerability at points in her vocal delivery which exquisitely expresses the emotions underlying the lyrics. The final track, “Ballad of the Quiet Citizen” feels Cohenesque in its delivery and is a testament to those who really make a difference in the world.

VanWyck has created a thoughtful, warm soundscape for us to inhabit for a while. These songs scrape below the surface of the day to day, urging us to think of what might be possible; what might happen if we made that detour.