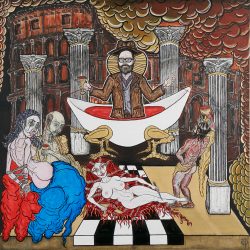 You won’t find the feel-good hit of the summer on Afton Wolfe’s debut EP. But it’s a pretty safe bet that feel-good hits weren’t high on the list of priorities that he had for this project. With songs that meditate on death, decay, and departure—these tracks will be a great soundtrack for watching leaves turn and fall, shorter days, and darker nights. That’s not to say that the songs on the album are depressing or bleak. Wolfe examines each theme with a sober subjectivity that never loses touch with the understanding that endings are the precursors to beginnings in the cycle of life or the long-view of history.

Wolfe’s songwriting blends lyrical abstraction, sparing accompaniments, and melancholy melodies and harmonies. He combines those elements masterfully on this EP. His voice has earned him comparisons to Tom Waites. His inspirations range from ancient philosophy to contemporary motion pictures.

It’s definitely not an album that will satisfy your sweet tooth. It packs as much weight as possible into a half-hour and does it without becoming cumbersome. As a debut, it does more than enough to make an impression.

Whisky-voiced wisdom on the worrisome and weighty