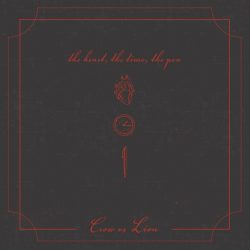 The number thirteen is one of the most mysterious and storied numbers in our numerical system. For the superstitious, it’s bad luck, but for many religious and folklorists, as well as tarot readers and tattoo enthusiasts, its significance runs deep, man. Thirteen plays into ‘The Heart, The Time, The Pen,’ the sophomore release from Crow vs Lion, the brainchild of Dan Gallagher. Though Gallagher hails from the States (Bucks County, Pa, to be exact), the sound of Crow vs Lion incorporates many nods to skiffle and traditional English folk.

On ‘The Heart, The Time, The Pen,’ the music takes a back seat at times to the concept, however. Containing thirteen tracks and featuring contributions from thirteen musicians, it focuses on three themes (you guessed it – matters of the heart, time, and the pen), and features three sections of four songs for each theme with the title track at the end to wrap it all up. The band’s EPK explains further, “You will hear three transitions, that are placed before the first song of each section that serves as indicators you are entering a new theme (The Heart, The Time, The Pen). The samples within these transitions were thoughtfully selected and contain deeper meanings to the three themes respectively.” The album, helpfully, comes with a listening guide.

While one might scoff at such pretensions depending on your perspective (you shouldn’t need to have a “listening guide” to enjoy the music, one might be inclined to observe), when you get past all the window dressing (and the incessant sound effects that would give even Roger Waters pause), the music contains a certain ebullient charm and innocence.

The title track is quite an apropos coda, filled with joy and a galloping tempo. Also of note is the literate, circle-of-life observation of ‘Newborn (Exon 42)’ and the ‘Ghost of Tom Joad’-era Springsteenian folk of ‘Missouri.’ Even when you get passed the literal bells and whistles that open ‘Five Six Seven Eight,’ you’ll be rewarded with a pleasant horn-driven pop ditty worthy of Peter Noone.

Ultimately, you’ll get out of Crow vs Lion what you’re willing to put into it. If needing a listening guide to fully enjoy the experience is your cup of tea, by all means, drink up. Thankfully, however, you don’t really need one to enjoy much of it.