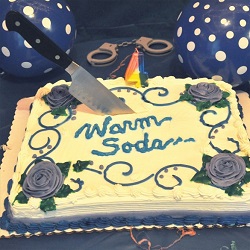 The fourth, and apparently last, album from Matthew Melton’s power-pop band Warm Soda is in an incandescent hurry – a dozen songs each clocking-in at well under three minutes, the whole album over in half an hour. The pace is relentless, barely a heart beat between songs – making for a comet tail shedding material in perfect single sized portions as it plunges towards the sun. Opener Young in your heart lays out the upcoming smorgasbord, and the bill of fare today is going to be songs about girls – “In the world all I want is that girl” – although any declarations of eternal love have to be taken with a pinch of salt as amorous intent is aimed at a series of objects of affection.

Never less than catchy, there’s more variety than might be thought crammed into these precious minutes – shades of Belle and Sebastian on Tell me in a whisper, a definite New Wavey feel on Game of Undefined Love with its compressed vocals and stop start percussive percussion and big bass lines – as well as some pleasingly spacey guitar.  Angel of Love is out-and-out Glam Rock balladeering – fifties rock and roll vocals and sentiments tied to punchy, stomping, drumming and insistent rhythm guitar. It’s T-Rex with a baritone. There’s teenage angst a-plenty, from the needy Don’t Leave me for another guy (“don’t leave me all alone – I’m helpless on my own”) to the bedroom dreams of the title track which proclaims “In my room I make my final plan / In my room I know just where I stand”. It’s hard to pick favourites from such a spread of delights – but To be with Ramona blends sixties beat band stomp with a touch of Elvis Costello and the Attractions which only those who have cut all ties with the aspirations of youth and the excitement of endless time to play with could fail to fall for head over heels.